a site to explore the difference between meaningful and ill-conceived educational reform (note: you have to open a post for its links to be activated)

Learning to Listen: a call for support of the writing project’s intensive summer institutes

The small but heavy cardboard box had been opened, closed, and put aside–part of a larger project to plow through the accumulated debris of twenty-eight years of marriage. Its moving label read “Home Office. Books. His.” My daughter Stephanie called me to ask if I might pick it up as part of my upcoming trip to Berkeley. Why not?

Steph’s husband Mike, mindful of my weak lower back, hefted the box into the back of my car. I’d had no occasion, therefore, to examine its contents until I arrived home later that afternoon and carefully set the unopened box down in the center of our living room rug.

The first items surprised and amused me: the “subfusc” gown — a black cotton vest in reality — that I was required to wear while attending tutorials at Oxford;

an endearing picture of me at about age four; 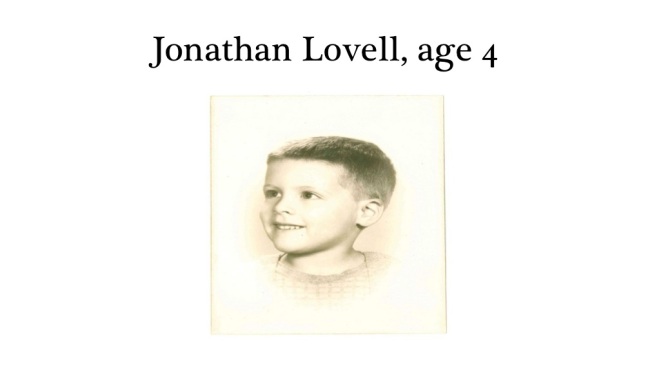 a somewhat disorienting picture of my father at a younger age, looking for all the world like a young girl;

Then came the books. As soon as I saw the top one I knew exactly what they were. The red cover with the words “Ballads and Sonnets.”

And then that oh so familiar frontispiece: an oval lithograph of the poet, Dante Gabriel Rossetti, with his large expanse of forehead, short beard, and well trimmed mustache. His left hand holding a felt hat tipped provocatively “open” to the viewer; his right clutching his dun colored vest; those deeply inset dark eyes once again looking out menacingly at me. 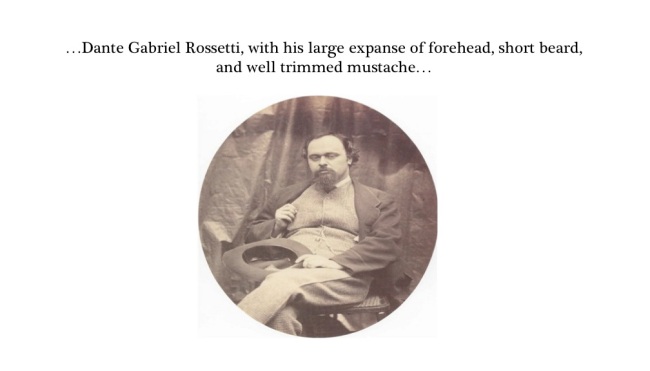 I was back, almost instantly, to New Haven in the summer of 1979. Rossetti’s “Ballads and Sonnets” were sitting on my high drafting table. I was reading over a chapter of my dissertation that I’d written the previous summer. Even with my kindest critical eye, I could tell it was painfully convoluted and overwrought: a prime example of what Oxford’s Dame Helen Gardner called the “lemon squeezer” school of literary criticism.

The house was quiet. Stephanie and her mother were abroad on a fellowship-sponsored research trip to Paris and Venice. My younger daughter was at a summer kindergarten program just a few blocks north from our downtown New Haven home.

My feeling in looking over my previous summer’s work, and looking over the poems and paintings that would serve as the focus of my next chapter, was of nausea. Overwhelming nausea. As a poet, as a painter, and as a man, Rossetti was a difficult person to like. He was self-absorbed, obsessive, demanding of others’ attention, given to long bouts of depression. To me, both his poetry and his paintings seemed to reflect these attributes: they both had a hot-house quality that I found particularly distasteful, seeming to require that readers be drawn into the poet/painter’s oppressively still and cloistered interior spaces. 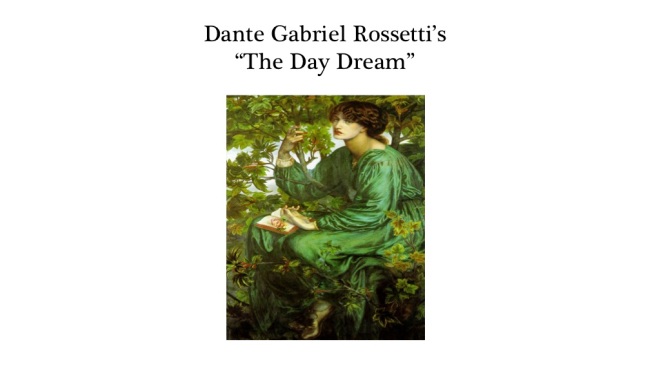 I did not wish to be drawn into this world, either by Rossetti’s poems or by his equally lush and overwrought paintings. So what in the world was I doing writing a dissertation on this man’s work?

What compounded my problem, however, were the consequences of NOT finishing my dissertation. I’d just finished my second year on the faculty at Teachers College, Columbia University’s graduate school of education,

and I loved what I was doing in my newly discovered field of English Education. If I did not finish my dissertation this summer, or at the very least make significant progress on it, I could say goodbye to my Teachers College position, and for all I knew any future at all in higher education.

These problems were further complicated by my back and forth movement over the past two years between teaching English Education classes at Teachers College during the school year, then returning in the summer to the very different set of questions and problems posed by my sunken-eyed poet/painter. How could I possibly find something worth writing about in the work of this somewhat marginal Victorian artist, especially when my heart was increasingly drawn to the compelling issues faced by public school English teachers at the middle and high school levels?

My day-to-day strategy for coping with my sense of growing anxiety was simple and satisfying. As soon as I completed a page of writing, I’d go out and shoot hoops in our backyard. 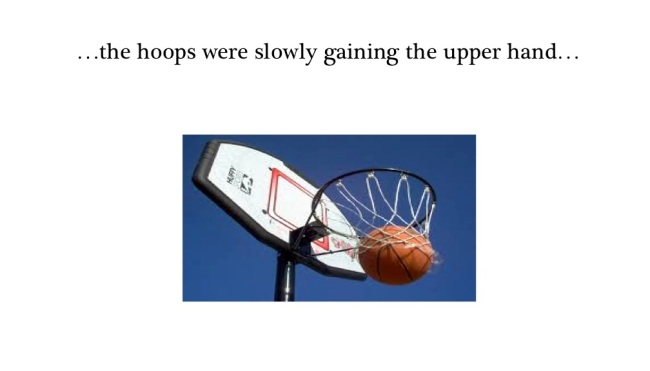 I was getting some work done, very slowly, and my shooting percentage was improving significantly, but I could not help but feel the hoops were slowly gaining the upper hand.

I was spending one hot and muggy summer morning gazing out at my backyard, thinking that perhaps this morning the hoops might come before the writing, when I chanced to pick up a book I’d read, rather superficially, a number of years earlier. It was a study of Shelley’s mythmaking, written by one of my graduate school teachers, Harold Bloom.

It had grown out of his own dissertation on this subject, also completed at Yale. For some reason the passage that caught my eye was a discussion of Shelley’s “To a Skylark.” I was familiar with its opening stanzas, as it was a favorite with anthologists of my parent’s generation:

That from heaven or near it

In profuse strains of unpremeditated art.

From the earth thou springest,

The blue deep thou wingest,

And singing still dost soar, and soaring ever singest.

It’s vitally important, Bloom argued, that the distance between the poet-narrator and the skylark dramatically increases with each successive stanza. In fact the bird has already soared so high before the poem begins that the poet does not even see it; he simply hears its “profuse strains of unpremeditated art.”

With each succeeding stanza, therefore, the poet must re-train his ear to detect the ever-receding melodies of the bird’s unpremeditated song. To put it simply, the swiftly moving upward trajectory of the skylark, away from the narrator, is inextricably linked to the appeal of its “full hearted” song.

And to put my own response to Bloom’s argument equally simply: I’d never thought of looking at the role of the poet, or more generally of voice and inspiration, in quite this way. That we start by hearing an already distant air, and as we strain to hear its glad-hearted melodies, it is already growing more and more distant from us, soaring away from us as we labor to hear its song. The speed of that skylark’s flight, and the fact that it was flying upwards and away from the poet, even as the poet was attempting to capture and remember its song, presented a riveting and arresting picture for me of what Shelley was up to in many of his poems.

And then I realized, quite suddenly and with a degree of comprehension I find difficult to explain even today, that this was what Rossetti was up to in virtually all of his.

It was a single moment, really, and of course I went on to write and re-write many subsequent pages and chapters,

and to shoot many hoops,

before I completed my dissertation the following summer. But it was as if I’d been given a wholly unlooked for gift. As a result of this gift, everything that in my previous study of my menacing-looking poet-painter had been vexing and harassing now appeared in an entirely new light.

I experienced the writing of my final chapters as something pleasurable, something I looked forward to, something that I knew I could do with integrity and even with occasional insight.

So what might we make of this story of writing and revelation, of perseverance well beyond the bounds of probable success? I would suggest the following moral. That what we experience when we write is quite like listening for the full-throated, glad-hearted sound of that skylark.

As I’ve discovered from co-directing over 25 Writing Project summer institutes, and being a full participant in two, we start by hearing only the dimmest whisperings of our colleagues’ and our own voices. But with a day-by-day training of our ears, and a growing faith that each of our colleagues, and ourselves, do indeed have voices to be heard, 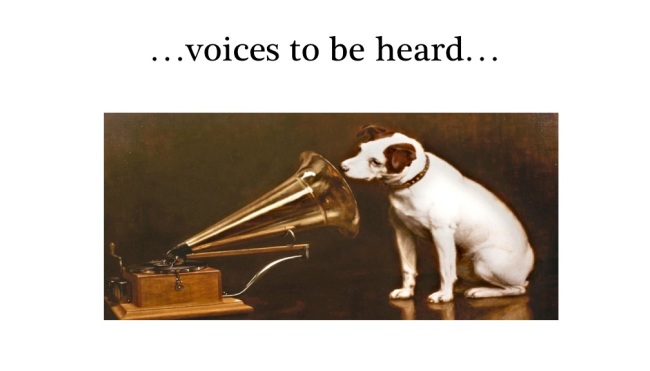 we begin to hear them. And it’s this very faith that helps to transform the hesitant murmurs of those initial days into the full-throated roar of the final days of a summer institute.

We are now at a point in the evolution of the 200+ sites of the National Writing Project where continued funding of these invaluable and inspiriting summer institutes, each costing about 30K per summer to run at their maximum level of effectiveness, has been put in jeopardy. This has resulted largely from the decision five years ago by the US Department of Education under the Obama administration to “zero out” ongoing funding for all categorical educational programs, including the National Writing Project. Given the central importance of these intensive summer programs to the vitality of all 200+ sites of the National Writing Project—certainly one of the most influential professional development programs in the teaching of writing in our lifetime—I believe it is essential for us to act now to prevent these often life-changing summer institutes from receding into our collective memory. Without such action, these pearls of professional development will surely slip, almost without our notice, slowly and quietly into this good night.

Note:  An earlier version of this essay appeared in the May 2013 issue of California English; this “illustrated” version was first given as a closing presentation to a San Jose Area Writing Project’s Saturday Seminar on March 8, 2014